Chapter 2 - The Heart of the Story

Chapter 5 - Gateway to the Otherworld Journey

Where are we going?

Welcome to The Story Tour! We’re going to begin with a little introduction to fairy tales so that you can see what kind of stories they are. Then I’ll give you a couple of exercises that will lead you to the pictures you find intriguing.

Even just this brief dip into a story can produce some surprising results. You might find that what you initially see in a picture is not what you find going on underneath. Or your feelings about the picture might shift dramatically after you’ve had a look inside the story.

Once you’ve finished this chapter, you may feel very drawn to a particular fairy tale. If so, you’ll be ready to move on in The Story Tour. By the end of the course, you will know your story well enough to tell it in your own words. You will have mapped the ground it covers, and you’ll know why it’s a meaningful story for you.

What is a fairy tale?

In popular culture there are many misconceptions about what fairy tales are. In fact, there are so many that I’m tempted to say the fairy tale herself has come under a spell!

So let’s explore what fairy tales are by addressing some of the predominant “myths.”

Fairy tales are stories for children. True or False?

Not really true. Fairy tales began as folk stories that were told to all ages and had been circulating for generations before they were written down.

The Grimm brothers did call their first edition of fairy tales Children’s and Household Tales (Kinder und Hausmärchen, 1812)  but the book was never intended for a child audience. The authors were engaged in collecting old German folk literature, and, as Jack Zipes writes in The Brothers Grimm, the book “was simply part of their grand project to excavate the natural poetry of the German people.”

The Grimms believed that the people with the strongest attachment to the tales lived close to the land. They peasants, fishermen, miners and shepherds. The tellers tended to be old men, women, and children. Servants and governesses often told stories to their young charges, so educated women from the middle class and the aristocracy also became sources for the Grimms. As they published revised editions, the stories were edited and refined for children, or rather, as Zipes says, “for the adults who wanted the tales censored for children.” 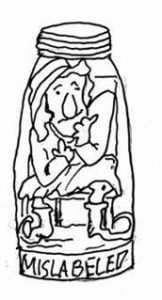 Fairy tales, also known as “wonder tales,” were traditionally told in the winter when the household was shut inside and the women were spinning. In The Interpretation of Fairy Tales, Marie-Louise von Franz says that in agricultural communities, telling this kind of story became “a kind of essential, spiritual occupation.” The stories contain so many references to spinning that some have called them rockenphilosophie, the philosophy of the spinning wheel.

With the advent of the printing press, people began collecting the folk and fairy tales that had been circulating for generations. Along with Jacob and Wilhelm Grimm in Germany, other collectors included Alexander Afanasyev in Russia, and Giovanni Francesco Straparola in Italy.

Some people wrote newly imagined stories, and it was one of those writers who coined the term “fairy tale.”  In 1697, Countess Marie-Catherine D’Aulnoy published a collection of stories which she called “contes de fées” or “fairy stories.” She was part of a movement of aristocratic Parisian women writers who gathered in private salons and wrote fairy tales to give voice to feminine ideals of social justice and ethical conduct.

Charles Perrault, Madame de Beaumont, and Hans Christian Andersen gave the world some of our favorite literary tales. More recently, Richard Kennedy, Jane Yolen, L. Frank Baum, and P.L. Travers have contributed to the rich tradition of spinning tales. While many stories have been targeted to child audiences, the best stories speak poetically to all ages, across cultures, and put us in touch with our collective human experience.

It’s true that fairy tales are very old. For thousands of years, people all over the world have been telling these stories, and some say that the themes go back as far as 25,000 years.

Yet while they are very old, the stories aren’t obsolete because they keep getting picked up and retold. Even in modern times, we perpetuate the stories that speak meaningfully to our experience. As Gaston Bachelard once said, the old legends persist because each generation has “intimate reasons for believing in them.” 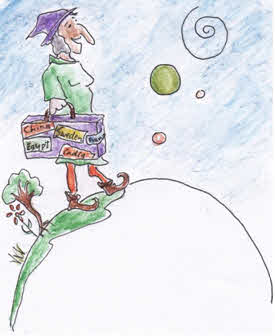 If a fairy tale has been told repeatedly, it may seem too common to consider seriously, but in my view, the popularity of a story gives it a kind of magnetic power. Over many generations, how many thousands of people have told variants of tales like Cinderella, Beauty and the Beast, Sleeping Beauty, Jack and the Giant Killer, The Six Swans, Rapunzel, Hansel and Gretel, The Handless Maiden, and Snow White?

Well-told stories carry the signature of all the storytellers who have spent time with them, and that’s an inspiring thought. Just imagine how many people have related to Cinderella bent over her hearth, or little Jack setting off to slay a giant! The most common stories hold the power of all that shared experience.

Fairy tales have nothing to do with the real world. True or False?

False. Fairy tales do not take place in physical reality but they do deal with the human experience of life, and they can help us to confront struggles, losses, and wounds that might be otherwise difficult to face.

The very word “fairy” is rooted in Latin and Spanish words for fate: fata and fada.  It is also connected to the French word fée, which is associated with enchantment. In essence, fairy tales can be seen as enchantments that take us to other worlds to help us grapple with our fate in this world.

As Donald Baker says in Functions of Folk and Fairy Tales, the fairy story is an allegory of our ordeals and initiations in life. “Far from being escapist,” he writes, “… folk and fairy tales are a means of coming to terms with the world as it is—of confronting reality, not running away from it….”

Because the stories take place in an otherworld, they can bring our emotional situations into focus. We can see our predicaments represented metaphorically in Rapunzel trapped in her tower, or Hansel and Gretel wandering homeless in the forest. The stories give expression to our inner experience. They allow us to safely approach the wounded parts of ourselves and consider how they might be healed.

In Donald Baker’s words, “… the psychological effect of healing our emotional wounds is a major function of the fairy tale.”

False. Granted, on the surface, a fairy tale appears quite flat and two-dimensional. The stories are action-oriented and don’t seem to have much emotional depth. Yet for that very reason they speak universally while inviting us into our own depths.

The stories generally begin with some sort of wound or loss. Hansel and Gretel lose their ability to find their way home, Cinderella loses her beloved mother, and the Steadfast Tin Soldier comes out of the manufacturing process with only one leg to stand on. The characters fall into a broken place, just as we do when we become seriously ill, lose a loved one, or leave a familiar way of life. 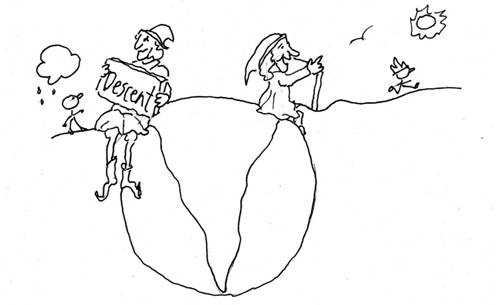 The fairy tale takes us into a realm of magic and mystery. The characters leave places that are familiar to us and move into dark woods, underworlds and deep seas. Through their ordeals they find a way to come to terms with losses and tragic turns of fate, and that is precisely why the stories can be helpful to us. They give us the “thread of the path,” in the words of Joseph Campbell.

Because the protagonists generally come out the other side, the storyline can become an allegorical lifeline for us.

This is a big one. I would say that they are not inherently sexist, but they can definitely be interpreted that way.

Popular culture’s interpretations of fairy tales, particularly the early Disney renditions of stories like Snow White, Cinderella, and The Little Mermaid have lent ammunition to the idea that fairy tales are sexist. They’ve given us the impression that the princess is always waiting for her man to ride in on a white horse, and that the culmination of her story is getting saved by him.

However, if you read a lot of fairy tales you’re bound to start wondering who is saving whom. The princess in The Six Swans liberates her brothers from the swan spell. In The Sea Maid, Hans Christian Andersen’s mermaid saves the drowning prince. Gretel frees Hansel from the witch’s cage, and Rapunzel’s tears heal the eyes of her blinded lover.

It all leads one to think that the heroes and heroines of the fairy tale are on more of an equal footing than we originally imagined. There’s also an interesting dynamic going on between them. As aspects of our own psyches, the masculine and feminine characters are always are seeking to reunite. If they lose one another, they will go to the ends of the earth to recover their love. These are deep ideas and they give us a lot to consider.

That’s not to say there aren’t sexist elements in fairy tales. For generations the stories have been circulating in a patriarchal culture, and they have taken on all kinds of biases. Yet the essential patterns remain relevant, often because they show us the suffering that is the consequence of dismissing and repressing the feminine. The king who has exiled his daughter in “The Goose Girl at the Well” mourns her absence and tries to make reparations. The third son in “The Best Wish” who is ridiculed by his brothers for being soft ends up winning love and kingship precisely because of his feminine values.

The stories invite us to contact the silenced voices and to retell unfinished stories from new points of view. At the same time, a feminine voice streams through the tales, affirming the triumph of receptivity, compassion, and kindness. 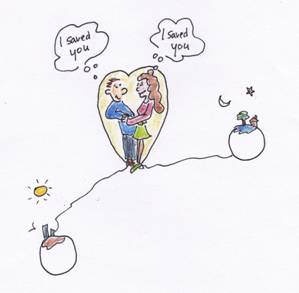 Fairy tales deal with spells and other superstitious nonsense. True or False?

False. Fairy tales are very concerned with spells, but not the kind of spells that involve ingredients like “eye of newt” and “wart of frog.”

In fairy tales, people often cast spells with words. An exasperated queen can turn her baby into a bird by simply saying, “I wish you would turn into a raven and fly away!” 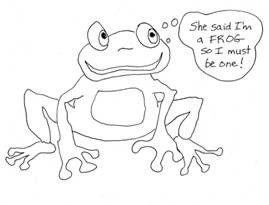 Characters who cast spells have the power to influence others to such a degree that they can actually change their shapes and identities. Some spellcasters are deliberately cruel and manipulative while others cast spells unconsciously, out of strong emotions like anger and spite.

By portraying the spellcasters colorfully, fairy tales get us looking at spells and enchantments in real life. We begin to see the way in which we come under the thrall of people whose underlying intentions are harmful. Because the stories are concerned with breaking spells and overturning negative powers, they give us a way to examine how those powers might be overthrown in life.

In his wonderful little book, Tree and Leaf, J.R.R. Tolkien calls the faerie world a “perilous realm” where everything and everyone is suffused with the power to transform. Behind the apparent fantasy, he writes, “real wills and powers” are at work.

In fairy tales, not all of those powers are evil. The stories also provide us with images of good enchanters and enchantments: fairy godmothers, wise spinning women, benevolent old men, and even giants. The tellers themselves are present in the enchantments, spinning tales that encourage us to look underneath the spell of appearances, and develop our insight.