Chapter 2 - The Heart of the Story

Chapter 5 - Gateway to the Otherworld Journey

Now that you’ve read the story, you know what is happening in the picture. But what does the picture mean to you? Why does this particular image stick in your mind?

To discover more about your connection to the picture, we’re going to play a “riddle game.” In a riddle game, people have to guess the identity of a character without knowing the character’s name. Instead, we hear about the character’s experience from the inside out. Riddle games allow us to contact the energetic life that is going on underneath the names.

Here’s how to play the game.

First, just STEP into the picture you’ve chosen so that you can feel the atmosphere and note any additional impressions you might sense.

I smell blood in the butcher shop. (I hadn’t picked that up before.)

Now STEP into the point of view of the character who is your central focus.

Hint: It may be a non-human character, a tower or a tree, for example. Treat the subject of your attention as if it were alive and with its own point of view.

JOT these impressions down.

In six to ten lines, let your character EXPRESS itself. Remember the catch: our characters can’t tell us their names.

READ your short monologue aloud so you can hear the voice of the character.

My Riddle of Jack

I’m standing in a butcher shop.

I just sold the cow to the butcher.

The butcher has just finished scolding me for not taking care of her.

I’m not supposed to cry, but I want to.

It’s not my fault we’re poor!

The butcher just gave me a handful of beans.

He says they’re not ordinary.

They must be magic. I know they are! 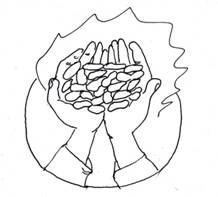 on The Riddle Game

How are you related to your picture?

Now that you know what it’s like to be the character, you can step out of the picture and reflect on what you have experienced.

This process is familiar to people who record their dreams. You have the dream, and then you write it down. Once you’ve done that, you can consider what the dream means to you.

In fairy tales, as in dreams, all the characters are expressing parts of the human psyche that are recognizable and interesting to us. So let’s consider how the character you’re looking at is related to you.

ASK yourself: How am I connected to this character? What part of ME is the character? Just write freely and let the connections be revealed to you.

My Connection to Jack

How am I connected to Jack? What part of me is Jack?

Jack is an aspect of me that is full of wonder and imagination. His mother doesn’t have any time for wonder, and neither does the butcher.

I can hear Jack’s mother saying, “You’ve got your head in the clouds, Jack. Why don’t you ever come down to earth?” She thinks he’s useless. He disappoints her. His love of nature and his imaginative inclinations just take away from the work he’s supposed to be doing on the farm.

As I’m writing my reflections down and speaking about this picture with others, it begins to dawn on me that Jack expresses a part of me that has felt diminished and put down by another part of me that has no time for wonder and imagination. Like Jack’s mother, this aspect of me is just busy trying to survive.

“You’ll never get any work studying fairy tales. Why don’t you go out and make some money? We need to put food on the table!”

As I observe these two parts of myself being played out in the story, I find myself reflecting on how little support Jack gets. There’s nobody in his life who believes in him. So I’m prompted to ask, “Where I do I stand?” 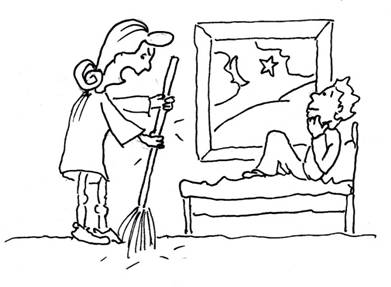