I waited for him to come. I knew he wouldn’t let me die alone. He would be there, somehow, with me, while I crossed over. And there he was, riding on the great lake in his own stone canoe. How he left his body behind to come to me, I do not know, but he rode with me over the waters. Together we looked down through the lake and saw the terrifying sight of people whose stone boats had sunk. Some were dead and others struggled.

We rode, unhurt, to the Happy Island. I knew he would be called back. He is the Chief, after all, and there is still work for him to do in the Land of Snow.

Chief’s Dead Wife in In the Land of Souls, Yellow Fairy Book.  Painting “Isle of the Dead,” by Arnold Bocklin. 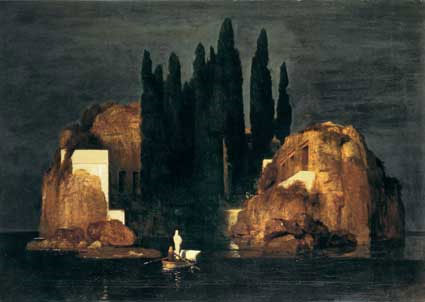