Being the youngest, my brothers elected me to keep house while they went out to hunt. They shot hares, wild deer, pigeons, and whatever else they found to eat. It was my job to dress the game and serve it up for dinner.

Ten years passed, and then one evening, before my brothers had come home, a beautiful girl arrived at the hut. She was dressed royally, and she had a star on her forehead. I asked her, “From whence do you come, and whither are you bound?” She said she was a king’s daughter. “I am seeking my twelve brothers,” she said, “and I will walk as far as the sky is blue until I find them.”

She showed me the shirts that we used to wear, and I burst into tears. I said, “I am Benjamin, your youngest brother.” I embraced her and we both wept, but then I found myself in a quandary. We had been exiled because of her, and my brothers were so angry with her that they had sworn to kill every maiden they met.

Benjamin in The Twelve Brothers, Grimms. Illlustration “In the Torment” by Sulamith Wulfing. 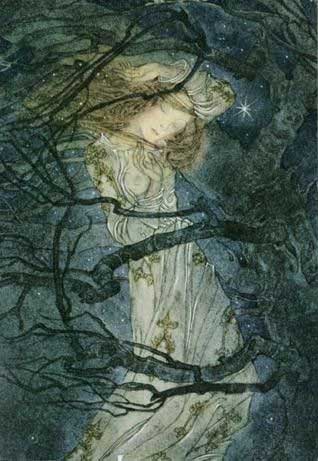