I begged my brothers to let me go with them when they set out to see the world, but they would have nothing of it. We’d all been given a wish, and we were told to make sure it was our best wish. My two elder brothers wished that every time they put their hands in their pockets, they would pull out gold.

I wished to have the love of every woman who set eyes on me. My brothers called me a fool and a lot of other names to boot. They didn’t want me seen with them now that they had the money to buy fancy clothes. I begged and pleaded to be taken along, and I didn’t let up, so finally they said I could look after their luggage. They made sure I stayed far behind them on the road. At sunset we came to a grand inn. My brothers told me to stay outside in the yard with the chickens while they went inside to feast and sleep in warm beds.

I leaned on a post and watched the moon rise. I sure was hungry. Then I happened to see the innkeeper’s wife looking at me through the window. She had her hands up around her face so she could see into the dark and her eyes were wide as saucers. Even though I was standing a little ways from her, I could see that her cheeks were flushed pink as a roses. She was beaming at me like the moon, and she soon came out to give me a little gift. It was better than one fine meal. It was something that would feed me forever. 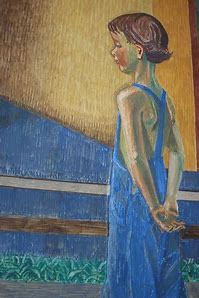