A great storm was raging. The wind blew so hard that the fisherman who stood on the shore could hardly keep his feet underneath him. Houses and trees were toppling over, and the very mountains trembled. Rocks rolled into the sea under a pitch black sky that thundered and cracked, and waves rolled in as high as church towers, with crests foaming.

I had granted all the wishes of the fisherman’s wife, and now she had the best palace to live in, and all the power in the world. But that wasn’t enough. “She wants to be like God,” the fisherman cried.

“Go to her,” I said to the storm-lashed man. “Her wishes are granted.”

The sea became calm. I watched him clamber up the rocks to the simple house where it all began. The pig-stye.

The Wish-Fulfilling Flounder in The Fisherman and His Wife, Grimms. Illustration by Arthur Rackham. 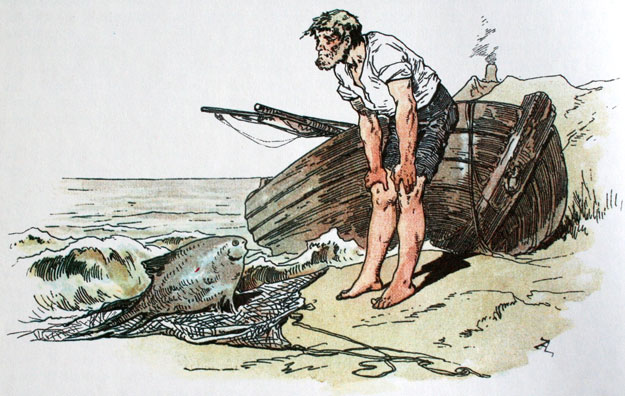