I had met an old woman, a cat, and a man and his children, and I had gone through many trials through the winter. I had suffered loneliness and the frigid cold, but nothing and no one was crueler to me than my own kind. It was very difficult for me to forget the old mother duck who said, “Have you ever seen anything quite as ugly as that great tall creature? He is a disgrace to any brood!” Then she came running towards me and bit me on the neck.

She was the leader, and so all the other ducks followed suit. My mother stood up for me, but when she wasn’t looking, I was snapped by everyone, even the turkey-cock, who was bigger and uglier than me!

I was much happier in the wild, by myself, where nobody could see me. I nearly died, though, when winter came. I would have died if a man hadn’t come along. The ice on the river had trapped me, and he cracked it and freed me. He put me under his warm sheepskin coat, and took me home to his children, who gave me a warm place to sleep. I stayed there for some time, but one day, they tried to play with me.

I was frightened and escaped the house. I found my way down to the canal. While I was gazing at the water, a flock of beautiful white birds walked slowly past. One by one, they stepped into the canal, and floated quietly on the water as if it were part of them.

“I will follow them,” I said to myself. “It doesn’t matter what they do to me.” I swam after them as fast as I could, and joined them when they came to rest in a green pool under the shade of a tree. As soon as they saw me, one of the younger birds approached me. I trembled and said, “If I am to die, I would rather that you kill me. I don’t know why I was ever hatched, anyway, for I am too ugly to live.”

Then I looked into the still pool. I saw many white shapes with long necks and golden bills. I looked for my awkward grey body and skinny neck. No such thing was there. Instead, where I was supposed to be, there was a beautiful white swan.

“The new one is the best of all,” the children cried. They were standing on the banks, feeding biscuits to the swans. Everything I had been through seemed worthwhile, in that happy moment. 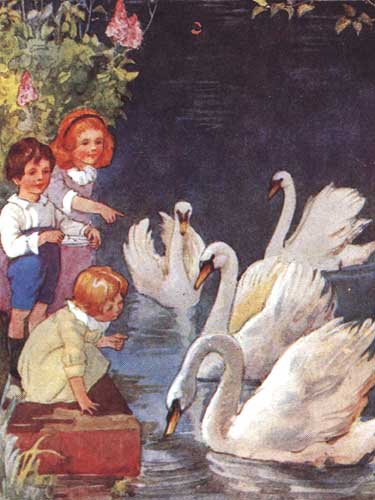