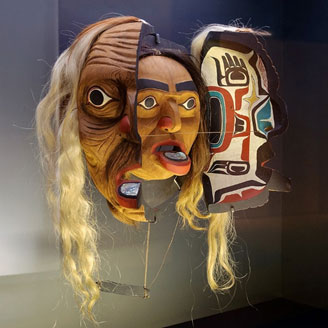 The picture above is a Kwakwaka’wakw transformation mask, which, like the story of The Face-Changer, gives us pause to consider the faces we wear, how we might ‘lose face,’ and what we may experience on the journey to find a new face and return to the community.

The story comes from The Corn Goddess, published by the National Museum of Canada in 1956.

In the early days there lived a beautiful maiden who rejected all her suitors because they were not handsome enough to please her. Finally, a young man asked his kinswoman to plead for him, and she did.

The girl sent hack word, “Let him bathe frequently and rub his face and body with cedar twigs.”

The enamored youth followed her instructions; he scrubbed himself with cedar twigs till the blood streamed forth and his face was covered with scratches.

After his wounds had healed, he again sent his kinswoman to press his suit with the maiden; but she replied, “Tell him to scrub himself this time with spruce boughs.”

Now spruce boughs are far harsher than cedar boughs. Nevertheless, the youth carried out her wishes and, when his face and body healed, he asked his kinswoman to approach the maiden a third time.

The girl answered scornfully, “Tell him to scrub himself now with blackberry bushes.”

The youth naturally shrank from this new ordeal. Then he heard that far back in the mountains there lived a spirit-woman who had power to change faces. He made up his mind to seek her out. After travelling for some time through dense forest, he emerged among scattered groves of timber.

Soon he saw smoke, and came upon a two-faced, Janus-like being named Atchuwitlas, sitting in front of a house.

“Why do you come here?” asked Atchuwitlas.

“I am seeking the woman who changes faces.”

The youth peered through a crack before he entered. On the walls were many faces, one of them covered with beautiful freckles. When he entered the house and sat down, that face had disappeared.

“What brings you hither?” the spirit-woman asked him; and the youth answered:

“Back in my village lives a beautiful maiden whom I wished to take as my wife. She rejected me because I was not handsome enough. She bade me scrub my face and body with cedar boughs. I did as she wished, but then she told me to scrub again with spruce boughs; and after I had scrubbed myself with spruce boughs, she told me to scrub a third time with blackberry bushes. Then I thought of you and came to ask whether you would graciously change my face.”

“Yes, I will change it for you. Examine these faces on the walls and see if there is one that pleases you.”

The spirit-woman took down one face after another for him to examine. But of each he said,

“I hardly think that this one will fit me.”

Finally she said, “I have only one face left”; and she brought from its hiding-place the freckled face.

“This one will fit you,” she said as she lifted off his old face and put on the freckled one. Then she dismissed him with the warning:

“Don’t wander from the trail, but return along the same path by which you came.”

The youth started homeward, but the woods seemed so much alike to him that he lost his way.

Where are you going?” she asked.

I am going home.”

“You had better come to my house. I will cook some food for you there.”

Seeing that there was no way of escape, the youth accompanied her to her home. Inside lay a younger and more beautiful woman, Black Bear, whose long dark hair stretched far down her back. She turned her back to them when they entered and seemed to pay no attention when Cinnamon Bear said, “Wait here while I get you some food.”

He waited. Suddenly the young woman sat up, drew some dried fish from a bag of woven cedar-bark, and said,

“Hide these fish. My half-sister will give you nothing but snakes. Pretend to eat them, but eat the fish instead.” Then she lay down again.

Cinnamon Bear now returned. She laid some snakes on the hot stones of the fire-place, poured water over them, and when they were cooked, invited the youth to eat. It delighted her that he seemed to enjoy the food she had provided for him.

In the morning Cinnamon Bear again told him to stay in the house while she gathered his food; but as soon as she was out of sight the youth rose up to flee. Then Black Bear, who had lain all night with her face turned away from her half-sister, called to him softly, “Where are you going?”

“You cannot escape, for she will soon overtake you. Come here and I will give you something to protect you.”

The young woman fastened a flat stone on his chest, another on his back, and one on each side. The youth then left her and hastened in the direction of his home.

Not long after he had gone, Cinnamon Bear returned.

“Where has he gone?” she asked her half-sister.

“I don’t know. I was lying down,” the other replied.

“I don’t know. I did not pay any attention.”

“Oh, well, I’ll soon find him,” Cinnamon Bear said impatiently, as she hurried out the door. Outside she changed into a bear and quickly overtook the youth. She called to him:

The youth stopped. “I am going home,” he said.

As he drew near, she raised one of her front paws and tried to scratch open his chest; but her claws grated on the stone and fell off.

“Lie down,” she ordered next. Raising her other front paw, she tried to scratch open his side; but again her claws fell off when they struck the hard stone. Vainly she tried to scratch his other side with one of her hind paws; and her last claws were destroyed against his back. Then she opened her jaws to bite off his head, but by mistake she swallowed him. A terrible pain now gripped her stomach. Groaning, she staggered home and lay beside the fire. The pain increased, until at last she said to her half-sister:

“Go and call grandfather Crane. He may be able to cure me.”

Crane came, laid his ear against her stomach, and said,

“This is a serious matter.”

Once more he laid his ear to her stomach.

“Yes, this is very serious. It sounds as though you have a human being inside you.”

Thinking that he was mocking her, Cinnamon Bear angrily caught up some ashes and threw them in his face. They scattered all over him which is why Crane, who was black, became grey; and he has remained grey to this day.

Now he laid his nose to Cinnamon Bear and sniffed; but the youth, putting out his hand, seized his nose. Crane screamed and flapped his wings, as cranes are accustomed to flap them today. The youth maintained his grip until Crane’s nose had stretched into a long beak; then he suddenly let go and sent his adversary sprawling on his back, Sadly, Crane picked himself up and went away.

From inside the body of Cinnamon Bear, the youth now tore out her heart and killed her. Cutting his way out of her body, he said to Black Bear:

“Will you come home with me?”

“If you wish,” the young woman answered.

She filled two cedar-bark bags with dried fish and, giving him one to carry, started out with him.

On their way they met a woman, Swan, who was digging camass roots. She chanted to them:

“Where are you going?”

“We are going home.”

“Stay with me and I will give you something to eat.”

They accompanied her to her home. There she heated two stones, laid on them two of her camass roots, and covered them. As they cooked, she chanted, “Yitchaiyou, yitchaiyo” meaning, “Increase, increase.”

When she uncovered the oven, the camass roots had increased to an immense pile. The young man and his new wife ate all they could, gathered the rest into cedar-bark bags, and continued on their way. Through this miracle that Swan performed a very few roots of camass today will satisfy the needs of many people.

The youth arrived home without further adventures. To celebrate both his return and his marriage he invited all the old men in the village to a feast, for which his dried fish and his camass roots more than sufficed, When the feast ended, the old men returned to their homes and said to their families:

“That young man has become marvelously handsome, and he now has a very beautiful wife. Was it the scrubbing with cedar-boughs and spruce-boughs that improved his looks? Or did he find the spirit-woman who changes faces?”

The maiden who had rejected him happened to hear these remarks and decided to visit him. Her people warned her to stay away, but she insisted that she only wanted to see his Black Bear, his wife. So she went to his house, sat down boldly at his side, and said,

“My brother, did you find the spirit-woman who changes faces?”

“I travelled back yonder through the woods.”

The youth lied, telling her to do exactly the opposite to what he had done. The girl immediately leaped to her feet and hurried through the woods to find the spirit-woman also. Discovering the right trail, she sped on her way until she came to the house in the clearing, and saw the Janus-like watchman sitting at the door.

“Does the spirit-woman who changes faces live in this house?” she asked.

Without a moment’s hesitation she entered. But the spirit-woman had sensed her coming and covered all the faces that were hanging on the walls. “What is it you want?” she asked.

“I want a face even more beautiful than the one I bear.”

“Well, I think I can satisfy you,” the spirit-woman answered, and, lifting off the girl’s true face, she fitted on another that was dreadfully lopsided. Not being able to see it, the girl imagined that the new face was more beautiful than the old one, and without even pausing to thank the spirit-woman, hurried from the house and sped through the woods to the youth’s home.

“Isn’t this a lovely face l obtained?” she said, as she sat down beside him.

“No, you look dreadful. Go away, and don’t come here again,” he answered

Utterly confused, the girl went home. There the people laughed at her ugly face. She wept bitterly, but she could not change it, for she could never find the way to the spirit-woman’s house again.