Tailor Caught on the Horns

When I heard the commotion, I rushed out of the hut where I had spent the night. A huge stag was confronting a bull, and they were engaged in a violent struggle. They rushed at each other with such rage that the ground shook with their trampling and the air resounded with their cries. They were equally matched. After a long battle, the stag thrust his horns into the bull’s body and the bull fell to the earth with a terrific roar. The stag finished him off with a few strokes.

Then all of a sudden, the stag, in full career, bounded up to me, caught me on his horns, and flew me through the forest. What did I have to do with all this business? The stag stopped at a wall of rock, and then gently let me down—more dead than alive.

He pushed me with his horns against a door in the rock. The door sprang open, and I heard a voice say, “Enter without fear, no evil shall befall you.” The hall was spacious, and the ceilings, walls, and floors were made of shining polished square stones, inscribed with signs I could not decipher. I was about to go out when the voice spoke again and said: “Step on the stone in the middle of the hall. A great fortune awaits you.”

I paused to consider. Should I take that step, or not?

Tailor Caught on the Horns in The Glass Coffin, Grimms. Painting by Eugen Krüger. 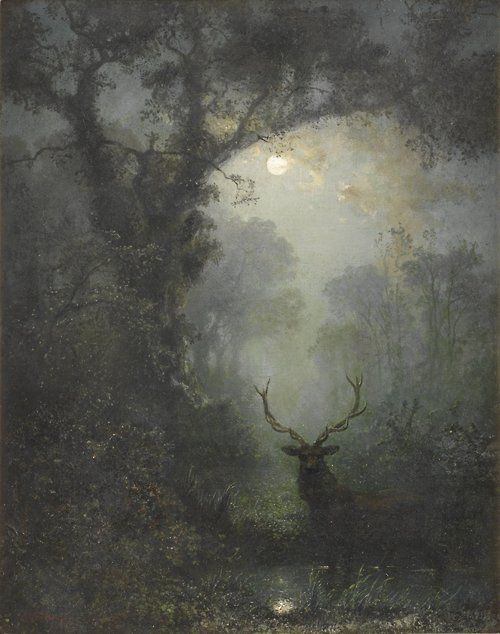