I smeared my face with mud, and I went to the palace where I worked as a swineherd. On my time off, I made toys for the princess. She rejected the real things that I offered her as a prince, so I made her artificial things, like a rattle that spins out all the songs that have ever been composed. She demanded my toys, and so, in exchange for them, I demanded kisses. She gave them to me. She planted them on my muddy face while hiding in her circle of ladies-in-waiting.

One day, the emperor saw what was going on and he drove his daughter and me out of his kingdom. I took her back to my own country. I left her out in the garden. Then I disappeared and came back dressed in my own clothes. My real clothes. Finally, I said what I had wanted to say all along. “I despise you. You did not understand the real gifts I gave you, the nightingale and the rose, but you could kiss a swineherd for the sake of a toy. This is what you get for it!”

I turned around, walked through the castle doors, and left her outside. 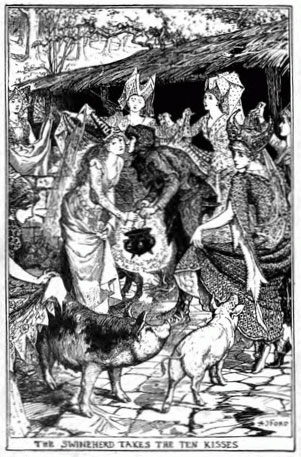