Soldier Who Grows a Huge Turnip

The king thought I had a green thumb because I presented him with the largest turnip anyone had ever seen. It was as big as the wagon I put it in when I brought it to the castle. I told him that I’m really not favored by Lady Fortune in any way. I’m a poor soldier who gave up the army life because I could no longer support myself. What is a soldier supposed to do in a time of peace? I took up farming. I never thought I’d be rich like my brother.

All of a sudden, the king said, “I will give you so many gifts that you will be the equal of your brother.”

I wasn’t about to refuse the gold, the fields, meadows, and herds, but I feared that my new-found wealth would incite the jealousy of my brother.

So much for times of peace!

Soldier Who Grows a Huge Turnip in The Turnip, Grimms. Illustration by George Cruikshank 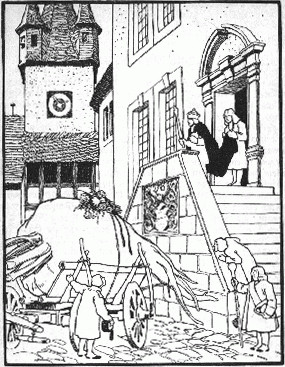