I learned the trade of a locksmith from my father, and when I was ready to go and seek my fortune, he gave me some money for my journey. I found some work, but after a time, I decided to look for another trade. I liked to hunt in the forest, so one day, in my rambles, I met a huntsman dressed from head to toe in green. He asked me where I came and where I was headed, and I said that I was a locksmith’s apprentice, but the trade no longer pleased me.

He offered to teach me to hunt, and so, over the next few years, I served him and learned many skills. When I was ready to go my own way, the huntsman could offer me nothing in the way of payment but an air-gun, which had the special power of hitting its mark without fail.

As I walked through the forest that night, looking for a tree to climb to escape the wild beasts, I came upon the camp of three giants who were roasting an ox on a spit. I decided to introduce them to some of my sharp-shooting skills, so I blew the food right out their fingers. When they discovered me, they invited me to join their adventure. They had plans to seize a princess who was sleeping in the tower of a nearby castle. I had no wish to carry off a princess. No, instead, when the giants climbed over the wall, I killed them in the courtyard.

I took nothing with me but their tongues, along with a few pieces of cloth that I cut from the clothing of the princess. The evidence might one day be useful. 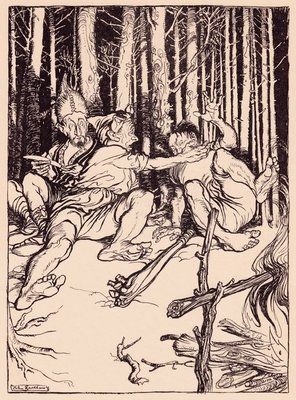