Shasasa Who Gives the Power Away

My father became wealthy overnight. How? That’s what I wanted to know. How did stone buildings with golden rooftops spring up along the Zambesi river while the people slept? Where did the herds of cattle come from? How did the river become crowded with fish? My father had become chief. How? What happened?

I begged him to tell me, and I continued to beg until he finally revealed his secret. He showed me Sipao the Magic Mirror. It could fulfill the wishes of anyone possessing it.

“Take it and put it in a safe place,” he told me. “That way, when men come to consult me, they won’t be able to steal it.” I took the mirror and put it safely under my pillow. I was pleased have my father’s trust and resisted the urge to use it.

My father was a wise chief, and we lived happily until he became an old man. Then one day, a white man came to our village. He said that he had defected from his people, and he wanted to live with us. My heart went out to him, and I loved him.

One night, in bed, I showed him the mirror and told him where our power came from. In the middle of the night, while I was sleeping, he reached underneath my pillow and took the mirror. Now the power of the earth rests in the hands of the white men, for they have Sipao the Mirror.

Shasasa Who Gives the Power Away in The Magic Mirror, Orange Fairy Book. Illustration by H.J. Ford. 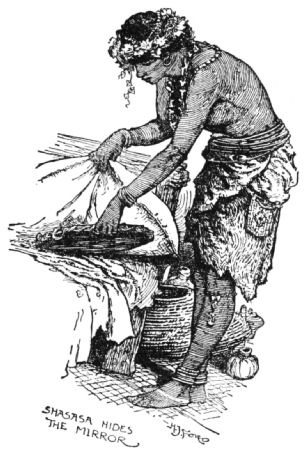