Queen Who is Taken to the Underworld

I was bored sitting in that dusty old castle, waiting for my husband to end his wars. Several times I went out on the hunt, riding in a small carriage drawn by two horses.

One day when the hunters went after a wild boar, I turned my horses in the opposite direction. I intended to return to my husband’s palace several hundred miles away, and I whipped up the horses until they ran fast. They didn’t know where we were going so they galloped at a wild, ever-increasing speed. Terrified, I dropped the reins and clung to the side of the chariot.

At last the horses ran blindly into a tree, and I was flung to the ground. I spent several minutes unconscious and then I woke to a rustling sound. When I opened my eyes I saw a huge woman standing over me — almost a giantess. She wore no clothes, just a lion’s skin which was thrown over her shoulders. She held a club in one hand and a quiver of arrows in the other.

“I am the Lion Fairy,” she said, “and you are going to spend the rest of your days with me in my palace. It is quite near. Come along.”

I entreated her to help me find my husband but she wasn’t interested in my worldly concerns. She wanted me for her own amusement. She changed her shape to a lion and led me down a thousand steps to a palace lit by lamplight. It stood on the edge of a lake of quicksilver. Huge monsters rose, battled with one another and fell, and in the air, ravens and crows uttered dismal cries.

In the distance, water flowed down a mountainside. The lion said they were the tears of unhappy lovers. My tears! I would never see my husband again. The dusty old castle was a paradise compared with this horrible place where no flowers grew, only nettles and brambles.

Queen Who is Taken to the Underworld in The Frog and the Lion Fairy, Orange Fairy Book. Illustration by H.J. Ford. 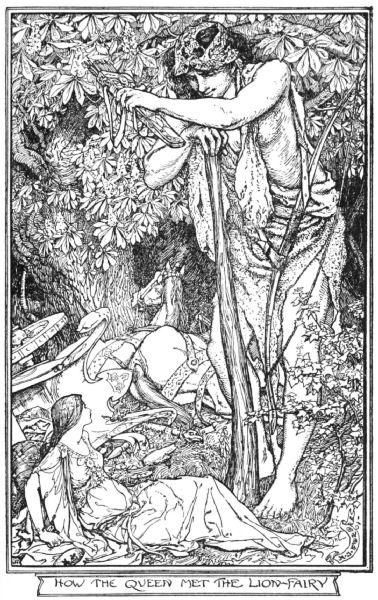