Queen Who Helps Her Son Escape

When our son returned from his long sea voyage, he told us that he had caught the Golden-Headed Fish whose blood would cure his father’s blindness. However, there was no time left to bring the fish home. The physician who knew how to make the salve would be gone. So he threw the marvelous fish back to the sea.

My husband flew into a rage and ordered his executioners to come to the palace and seize the prince. A servant ran to my room to tell me of the order, and I went to my son. I gave him common clothes, filled his pockets with gold, and hurried him on board a ship that was sailing that night. I assured him that the king would repent someday, and then I gave him some advice that came to me in a flash of light. I said, “Take no man into your service who desires to be paid monthly.”

Then I stood on shore and watched my beloved son’s ship sail.

I returned to the palace embittered. My husband has gone blind; not only in his eyes, but also in his heart.

The Queen Who Helps Her Son Escape in The Golden-Headed Fish, Olive Fairy Book. Painting by Edvard Munch. 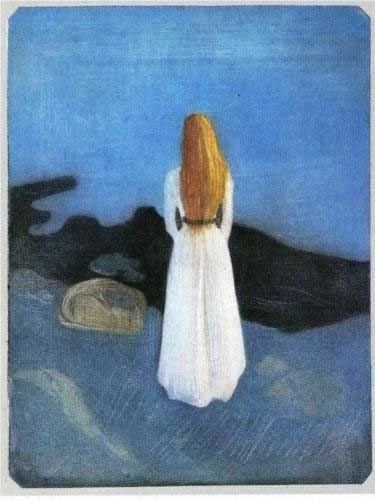