I found that out when the stag I had been chasing, suddenly stopped running and turned into a big, lanky man. “Well,” he said, “It’s a good thing I’ve got you now. I wore out six pairs of glass skates chasing after you and could never catch you.”

He dragged me across a lake to his big royal castle. After we’d had supper, he told me he had three daughters. He ordered me to watch over the eldest from nine in the evening to six in the morning and answer him when he came to the door at the strike of every hour. That was just the beginning of the tasks he gave me to do. None of them were possible, but I did my best. Now I’m supposed to chop down a forest with tools made of glass. The axe has broken in two, and the wedge has shattered into tiny pieces.

As I sift the grains of sand, I wonder who this king is. Why did he pursue me in the first place? Why did I pursue him?

The Pursuing Prince in The Children of the Two Kings, Grimms. Picture by Paolo Uccello. 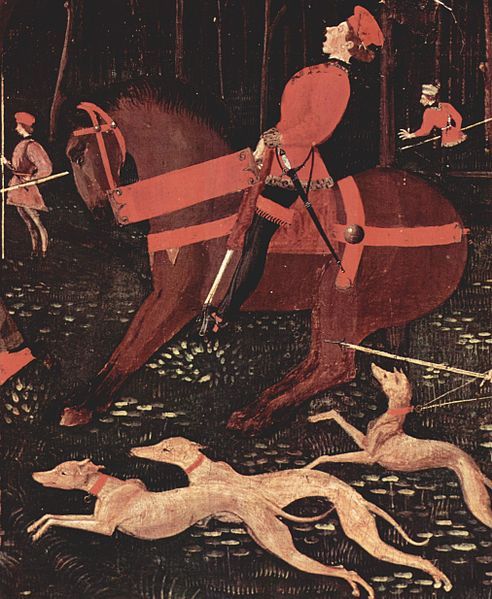