Princess Who Changes a Letter

In the heat of the afternoon, when everyone had gone to sleep, I left the governor’s house and went walking in the garden. I rambled about in my favorite nooks and crannies, and when I turned a corner, I came upon a man sleeping under a tree. I nearly tripped over him! He was very handsome, tanned and dusty with travel, and he wore the uniform of an officer of the king’s guard.

I noticed a letter peeping out of the folds of his turban. I tiptoed over, pulled it by the corner, and the whole letter slipped out. It was not difficult to break the seal, because it was sticky with exposure to the sun. The letter read: “Behead the messenger who brings this letter, secretly and at once. Ask no questions.”

I wasn’t prepared to let such a handsome fellow lose his head! I crept to my room, took a piece of paper, and wrote on it: “Marry the messenger who brings this letter to the princess, openly at once. Ask no questions.” Then I fixed it with the original seal, raced down to the garden, and thrust it back into the folds of his turban.

I thereby sealed my fate!

The Princess Who Changes a Letter in Story of the King Who Would be Stronger than Fate, Brown Fairy Book. Illustration by H.J. Ford. 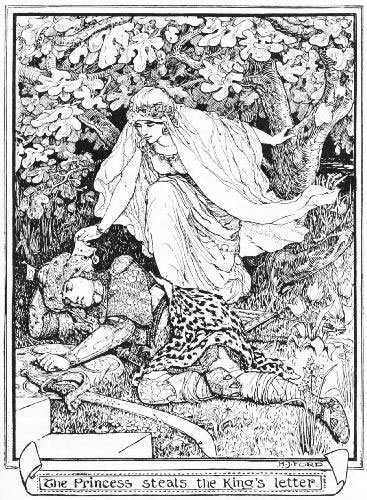