Princess Who Challenges the Red Knight

The Red Knight was a complete imposter! He stole the right to marry me. But I decided I wouldn’t get mad. I would get even!

I marched into the hall where the king and his nobles were feasting, and I presented the youth who had fairly and truly won my heart. I said, “Here is a man who claims he can do more wonderful tricks than the Red Knight. Of course, we can all agree, he must be an imposter.”

Turning to the Red Knight, I said, “You, Sir, have studied the art of magic. Will you please show this imposter how it’s done?”

I knew for certain the Red Knight had never opened a magic book in his life, but he would play along, because he thinks he does everything better than anyone else, with or without practice.

“Why don’t you turn yourself into a lion?” I suggested.

He twisted and turned, bellowed and roared, but in no way did he become a lion. “Maybe that’s a bit too difficult,” I said. “How about a bear.” That didn’t work either, of course. “Try a bee,” I said. The old codger buzzed, hummed, and flounced about like a fool.

“Now it is your turn,” I said to the youth. “Let us see if you can change yourself into a lion.” He did so at once and sprang upon the false knight!

The Princess Who Challenges the Red Knight in The Mermaid and the Boy, Brown Fairy Book. Illustration by H.J. Ford. 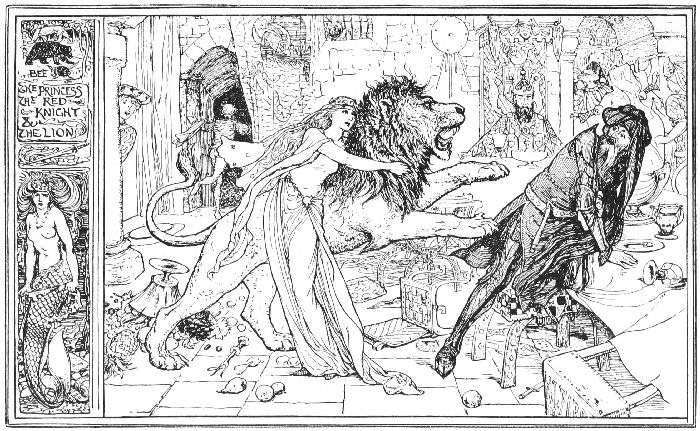