Princess Under the Control of a Dragon

I received a message that a young man had come to the gate. The gatekeeper wouldn’t let him enter the town.

I went down to see who had arrived, and, to my amazement, there stood the only man I have ever loved! I took his hand, drew him to the palace, and in a few days, we were married. There is no describing our happiness!

I had to tell him about the cellars. One morning, before going on my walk, I gave him the keys to all twelve of them. I warned him not to unlock the twelfth door. I worried that he wouldn’t listen, but I told myself to trust him.

Then, as I was walking along the street, I heard a terrible, familiar shriek. The dragon snatched me and carried me away.

Here I am, now. Back in the dragon’s empire.

Princess Under the Control of a Dragon in Nine Pea-Hens and Golden Apples, Violet Fairy Book. Illustration by H.J. Ford. 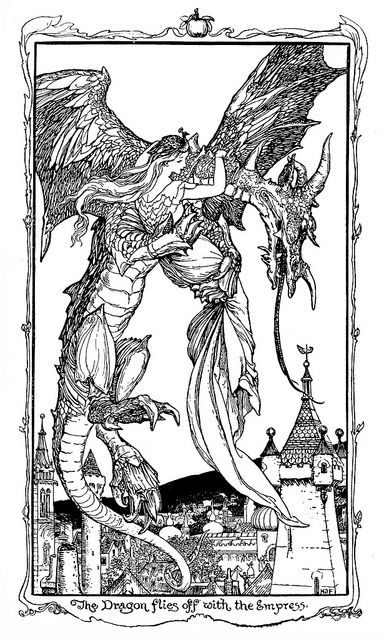