Prince Who Fights a Beast

My two older brothers think I’m a fool and a simpleton. But our father has become very anxious because some beast has been getting into his deer-park and killing animals every night.

Nobody knows who’s doing it but my father suspects the Norka. If it is the Norka it will have to be destroyed or it will destroy us.

My father said he would give half his kingdom to the son who could kill the beast. My two older brothers tried but they went to the tavern on the way and they got drunk instead.

I insisted on going. I took some weapons and placed them under me so that if I nodded off they would prick me. Around midnight the earth began to shake and I woke to see the Norka bursting through the fence.

I pulled myself together and ran straight at him. He fled! I chased him. I couldn’t catch him on foot, so I ran to the stable to get a horse. I caught up with the beast and fought him. I gave him three wounds.

Then we fell down, exhausted. We had a rest, but the moment I closed my eyes, the beast jumped up and ran away. My horse neighed to wake me and I set off in hot pursuit.

Again we fought. I gave him three wounds. Then we lay down to rest. Again he tried to flee. I ran after him and we fought. I gave him three more wounds. He fled for the fourth time, only this time he ran to a great white stone, tilted it up, and escaped. As he slid into the underworld he roared, “Only there will you overcome me, when you enter here!”

Prince Who Fights a Beast in The Norka, Russian Fairy Tales Collected by W.R.S. Ralston. Illustration by Lancelot Speed. 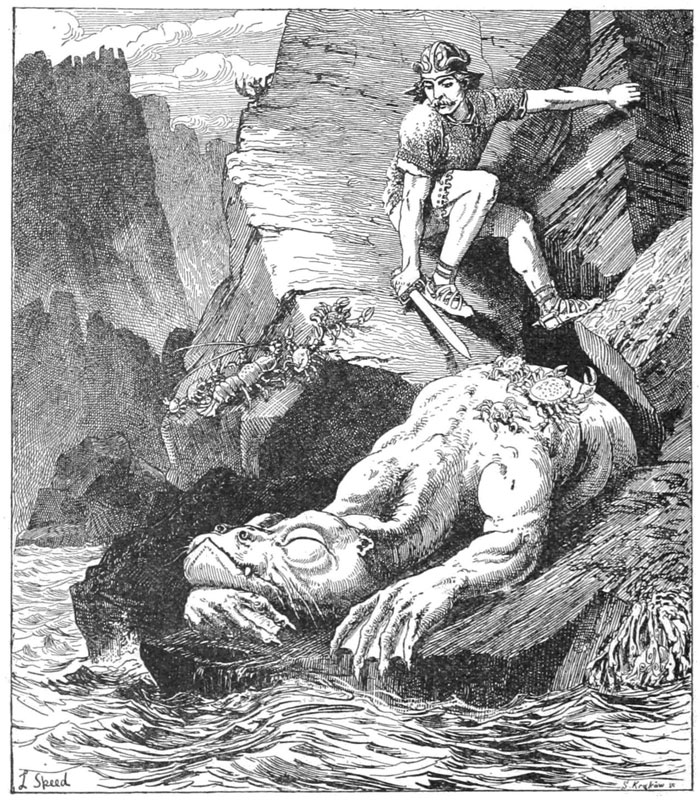