My brother is rich and, until just a little while ago, I was poor. What happened? Well, I was wheeling my barrow through the forest one day when I came upon a great, bare, naked-looking mountain. I had never seen it before, and I know that forest pretty well. I stood staring at the wall, amazed, and then I heard a great commotion. I pushed my barrow into a thicket, climbed a tree and saw twelve huge, wild men come along. “Sesame mountain, Sesame mountain, open up!” they roared.

The barren mountain opened up right down the middle! The men went inside and a wall shut behind them. After a while they came out with heavy sacks on their shoulders, and they said, “Sesame mountain, Sesame mountain, shut yourself.” The mountain closed!

Soon as they were out of sight, I climbed down and did what the men had done. I cried, “Sesame mountain, Sesame mountain, open up!” The mountain opened, and I went inside into a cavern filled with silver and gold. There were piles of pearls and sparkling jewels heaped up like corn. At first I didn’t know what to do. Should I take some of the treasure for myself? Well, maybe a little! And before I knew it, I was filling my pockets with gold. I didn’t take any of the pearls and precious stones, though. I had more than enough for my family! 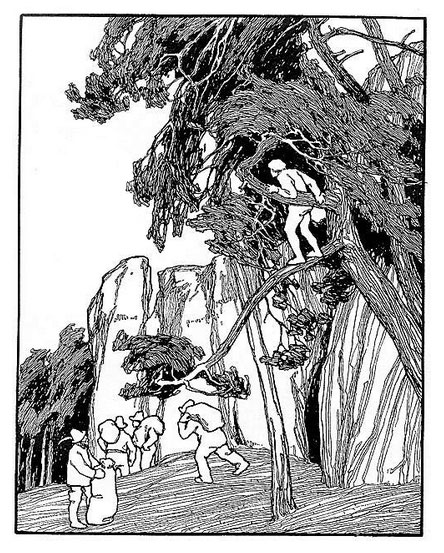