Petru Who Meets a Dragon

I had set off to get water for my father’s eyes. He had one laughing eye and one weeping eye, and only way to make the weeping eye laugh was to bathe it in water from the spring of the Fairy of the Dawn.

My two older brothers had gone on the adventure, but neither had returned.

I chose the best horse I could find in the stable, and after three days of hard riding, we came to the borders of the empire. We stopped at a deep, deep trench that girdled the kingdom all the way round. The only way to cross was by a single bridge.

On the bridge stood a dragon with seven heads and seven horrible faces, all with their mouths wide open, their jaws reaching to heaven and earth.

My horse neighed and reared. “Be quiet!” I shouted. “This won’t do!”

I dismounted and held the bridle in my left hand, sword in my right. I could see nothing but fire and smoke.

“There is no help for it; I must go back and get a better horse,” I said.

I mounted and rode home. And I assure you, that was not the end of the adventure!

Petru Who Meets a Dragon in The Fairy of the Dawn, Violet Fairy Book. Illustration by H.J. Ford. 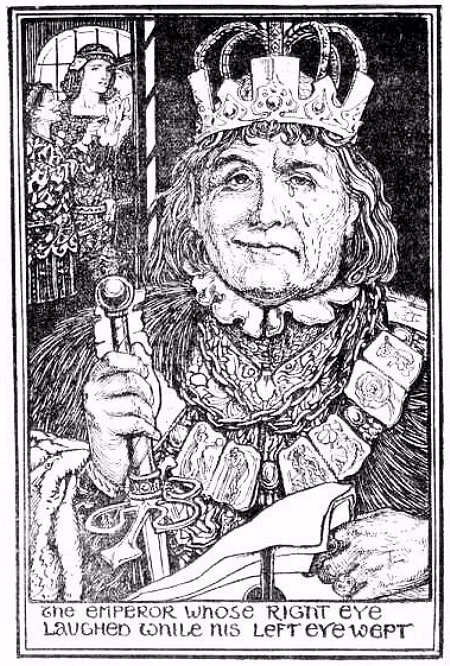