Old Woman of the Lake

One day, a young woman came to the river’s edge, holding a baby. She was crying, and I was moved to appear to her from out of the place where the river meets the lake. I asked her why she was crying, and she said that her husband and mother-in-law wanted her to drown the baby. It was the custom of her people to keep the boys and kill the girls or give them to an ogre for food.

I held out my arms and I took the baby. I told the girl to come back and meet me again at an appointed hour. She went home and told her husband that she had drowned the baby.

When she returned to the riverbank, she sat among the willows and sang,

Bring to me Dilah, Dilah the rejected one.
Dilah, whom her father Masilo cast out.

I appeared with the child, and she held the baby for as long as she dared. Then she returned the child to me and we vanished into the lake.

Old Woman of the Lake in The Sacred Milk of Koumongoe, Brown Fairy Book.
Illustration by H.J. Ford. 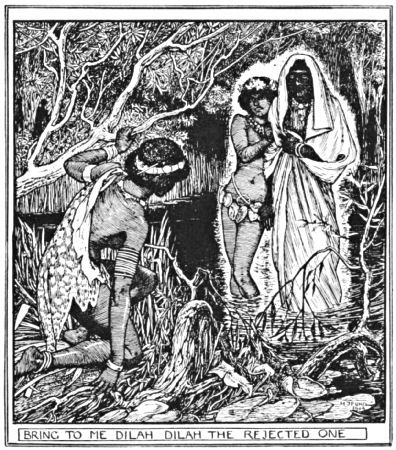