For a long time, I lived in the bottom of a pit, outside a palace that had no doors. I had only a lantern to my name.

I was sleeping one night when a king came along and scrambled down into the pit. He put his hand on my shoulder and woke me.

“Are you a bird or snake that you can enter here?” I asked in surprise.

“No, just a mere mortal,” he said, laughing. “I am seeking Zoulvisia.”

“Zoulvisia? The world’s curse? Out of the thousands she has slain, I am the only one who has escaped, though why she has spared me to condemn me to this living death I cannot say.”

The king told me that his men had just been killed, and that only he had survived. Zoulvisia had challenged him to fight. Was there a way to overcome her?

Yes, I said, but not by ordinary means. “Every day at sunrise she dresses herself in a jacket of pearls and mounts the steps of her crystal watch-tower. From there she can see over all her lands. If she detects anyone, man or demon, she will utter such fearful cries that those who hear her will die of terror.” I told the king to hide himself in a cave that lies near the foot of the tower, and when she has uttered her third cry, go forth boldly, and look up at the tower. That will break her power.

The king did just that, and when Zoulvisia saw him standing there, she said, “You are worthy to be my husband because you are the first man who has not died at the sound of my voice!” She let down her golden hair and drew the king up to the summit of her tower. “Ask me what you will, and I will grant your wish,” she said to the king.

The king asked that the old man be set free and sent back to his own country. And that old man was me.

Old Man Set Free from a Pit in The Story of Zoulvisia, Olive Fairy Book. Illustration by H.J. Ford. 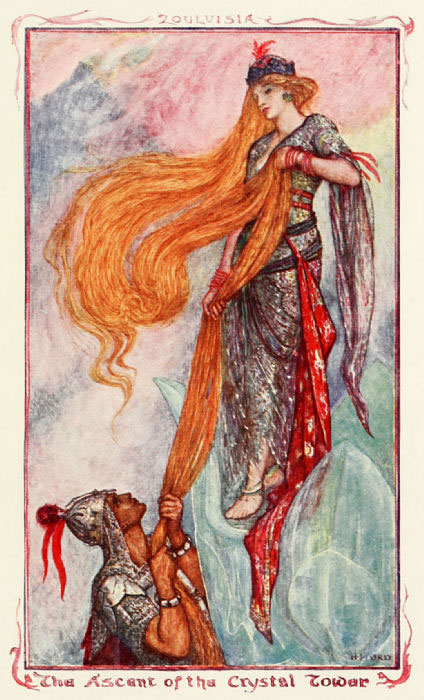