Niece of the Bereft Husband

After Uncle told us the story about his wife turning into a doll, he took us to the site where they had camped. To our amazement, we saw a life-sized doll lying under the skins.

At first we couldn’t believe it. We thought that Uncle had lost his mind, and had taken to sleeping with a doll because he missed his wife so much. But she looked so life-like!

Then we saw two pairs of footprints in the snow, leading from their hut to the place where they had camped.

I visit Uncle every day now, but nothing comforts him. Not even my little ones. I wrap my arms around him, and rock him like one of my own, but he has gone the way of his wife—stiff, and wooden as a doll.

Niece of the Bereft Husband in The Dead Wife, Yellow Fairy Book. Picture by Robert Henri. 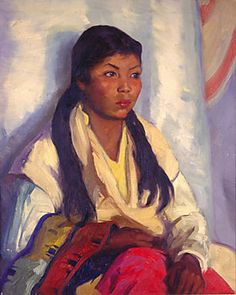