Mother of a Great Son

My child, my wonderful child! How could have he have come from me? He was not like the other children. He grew quickly into a tall, strong boy who spoke like a grown man. He did not speak often. Usually, he was silent.

One day I asked him, “My child, by what name shall we know you?”

He told me to call the head men of Senna to the riverbank. When they gathered, he led them down to a deep, black pool in the river where the biggest, fiercest crocodiles lived.

“Oh, great men, which of you will leap into the pool and overcome the crocodiles?” he asked.

No one would step forward, so my son sprang into the water and disappeared.

“Surely the boy is bewitched,” said the men, “for the crocodiles will eat him!”

Suddenly the ground trembled, and the pool heaved and swirled, and became red with blood. Then my boy rose to the surface and swam to shore. He was no longer a boy! He was stronger than any man, and very handsome. All the people who had come to the shore were amazed and rejoiced to see him.

Makoma means “the Greater,” and, indeed, he had proven himself to be greater than any other creature.

Then he came to me and said, “Rest gently, my mother, for I am going to make a home for myself.” He went into his hut, took his iron hammer and his sack, and went away. I have not seen him since. I look for him in the stars.

Mother of a Great Son in The Story of the Hero Makoma, Orange Fairy Book. Illustration by H.J. Ford. 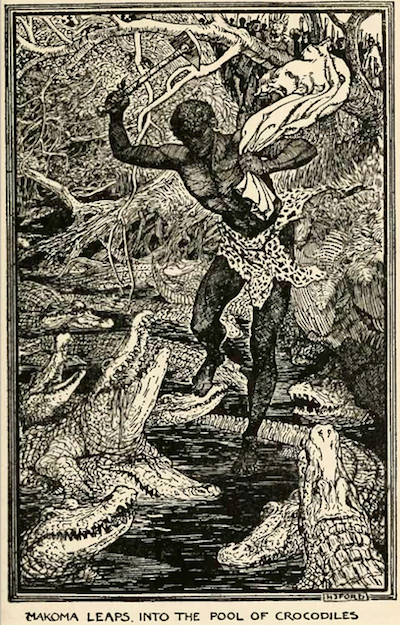