Down by the edge of the canal, in a forest of great burdocks, I built my first nest and laid my first eggs. I laid six of them. Five were white and perfect, but the sixth was an ugly grey color. It puzzled me, that egg. How did it come to be so different from the rest?

I took my egg-sitting duties seriously. Not like the other ducks who left their nests to gabble and gossip. I sat on my eggs, and oh, it took so much time! I checked on them several times a day to see if the shells were cracking, (which is probably why they took so long.)

At last, I saw tiny fissures on two of them, and the next morning, five eggs had cracked. By mid-day two little heads were poking out, and I helped them come into the world. Soon they were all out, but the big egg showed no signs of cracking. One of my neighbors came by and said it was a turkey’s egg. Hardly worth hatching. Turkeys are stupid. You’ll never teach them to swim.

I thought, No I will give the egg another chance. All through the next day I sat patiently, and, when I ventured to peek, I was quite sure I saw a tiny crack. The next morning, in the first streaks of sunlight, I felt something moving underneath me. I shifted my weight, and a big, awkward bird tumbled headfirst onto the ground!

There was no denying that he was ugly, but I preferred to say he was “large” and “strong.” 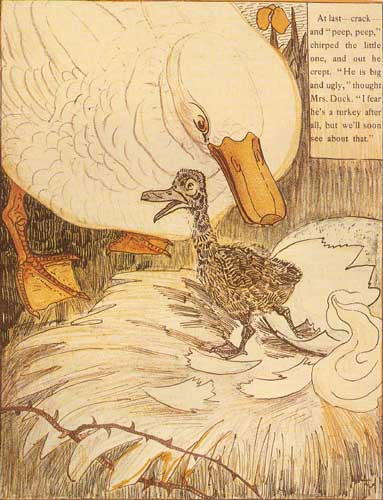