One day in the summer when the sun was shining like gold on the meadow of Dream Castle, a little princess, rosy and delicate, slipped away from Dream Castle and ran into the flowering meadow. She wished to be alone and free, and the meadow had always been her joy. She wore a dress that was whiter than white, made of silk and satin and muslin thin as gauze. With her gleaming golden hair, she looked like cottongrass, and that’s what people called her.

While she was sitting in the meadow, a great elk came stalking by. He stopped and snuffed the air.

“I am Princess Cottongrass,” she said, pointing to her crown which lay among the flowers. “What do they call you?”

“I go by the name of LongLeg Leap,” he said.

She got to her feet and stroked the muzzle of the kindly elk. “You are very stately,” she said. “And you have a crown too. I would very much like to ride on your back. Would you please let me come with you? You could carry me out into life.”

Leap said, “The world is big and cold, little child, and you are so small. The world is full of evil and wickedness, and it will hurt you.”

She insisted that she was young and warm, and she had warmth enough for everyone. “I am small and good,” she said, “And want to share the good I have.”

“Yes, but the forest is dark and the roads are dangerous,” Leap said.

“You will be with me. You can defend me.”

Leap tossed his head and he looked at her with his fiery eyes. Then he agreed, and she climbed up on his back.

“Where are you going to take me?” she asked. 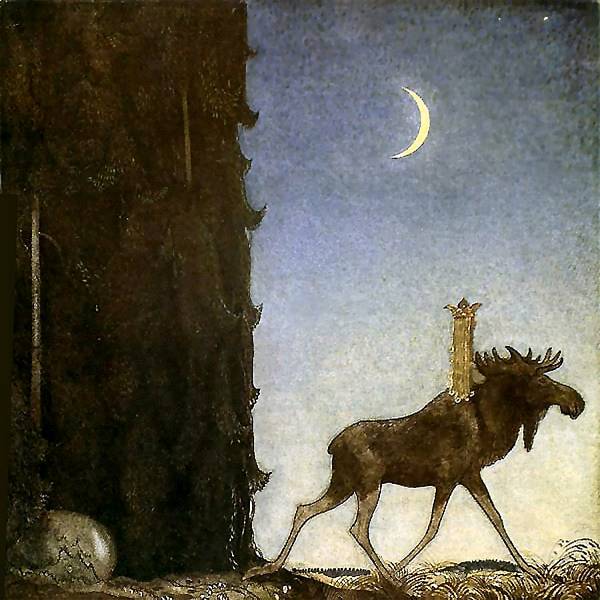 They traveled through the forest for some time, and then the trees thinned and they came into a mile-long marsh. There were tufts of sedge growing together in soft hollows and hillocks, and the little stunted bushes looked on from the banks as if they were afraid to follow the sedge into the soggy marsh.

Leap let the princess down and they had a feast of berries, but he was soon ready to go. She climbed onto his back and they carried on with their journey. She didn’t know where they were going but Leap said they had to get there by dark.

As they moved through the marsh, the princess saw creatures dancing over the sedge. Leap said they were elves. They might look sweet and friendly, but they were not to be trusted. “Just hold onto my horns with both hands and pretend you don’t notice them,” he said.

The princess obeyed but the elves had caught sight of them. They circled around and floated up close to the little princess.

The princess didn’t answer. They flew around her like the cold breath of wind. They became more insistent. They tugged at her dress and her long yellow hair. Leap snorted and began to run.

The princess realized her little crown was slipping off and she clasped it with one hand. At that moment the elves took their opportunity, and they snatched her crown. Laughing, they floated away over the marsh.

“Oh, my crown, my crown!” the princess moaned.

“Why didn’t you do what I told you?” Leap scolded. “You’re lucky they didn’t take more than your crown.”

They carried on and at last they came to a small clump of trees on an island in the middle of the marsh. Leap said he lived there, and that’s where they would sleep.

As the sun went down, the princess undressed. She hung her gown on a branch and lay down. She soon fell fast asleep, sheltered by LongLeg Leap who kept watch as the stars came out twinkling in the sky.

The next morning, the princess was awoken by the soft touch of the elk’s muzzle on her forehead. She jumped up and the small chain with the golden heart that she was wearing around her neck caught the sunlight like fire.

Leap had tears in his eyes. He didn’t know why he felt so strange about having the girl with him. Autumn was coming and he had a strong desire to be with his own kind. He was anxious to go.

The princess had no time to put on her dress. She got up on Leap’s back and held her dress in front of her as Leap dashed away into the forest. He frightened her, and so he calmed down and began moving more slowly into the deep woods.

They passed through large lichen covered boulders, tree roots that wound like snakes, and fir trees with moss hanging eerily from their branches.

Then the princess saw something stirring in the trees. Leap said it was the witch of the woods. “Answer her politely,” he said. “But don’t ask her for anything and whatever you do, hang on tight to my horns, with both hands.”

The witch glided towards them, hidden between the trees. She peered at elk and the girl. She had ice-green eyes and a mouth red as blood. She began to slither from tree to tree, following the elk. 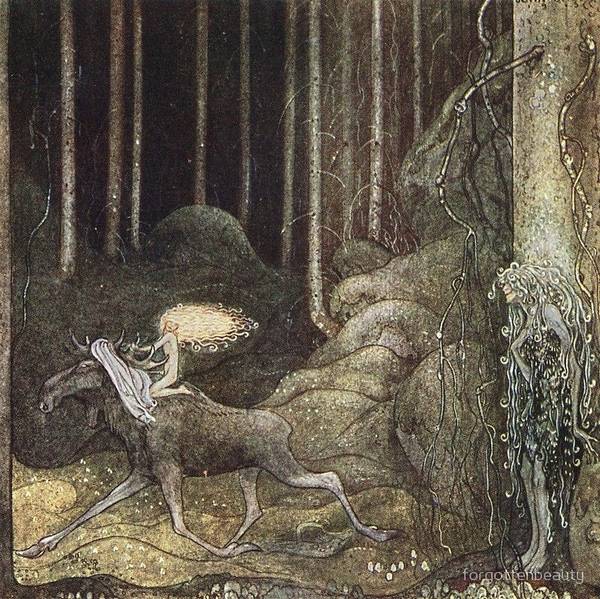 “What’s your name?” she called to the princess.

“I am Princess Cottongrass of Dream Castle,” said the girl.

“What are you carrying in front of you?” the witch asked.

“My finest gown,” said the princess.

The princess let one hand go to show her the dress and the witch snatched it and disappeared into the forest.

Leap chided her. “Why did you let go of my horns? If you had let go with both hands, you would have had to follow the witch forever. You would never have come back.”

The princess stopped sobbing and after a while she forgot about her dress. The day passed. At night, she slept under the fir trees while Leap guarded her, but in the morning when she woke, he was gone.

She jumped to her feet and called for him. He came through the undergrowth, breathing heavily. He had been on top of a hill looking east and sniffing the air. He had caught a scent of something. He did not know what it was, but he was compelled to move towards it.

She climbed up on his back. “Where are we going now?” she asked.

“To the pool,” he said. “Deep in the forest is a pool and that is where I go when autumn is coming. No person has ever been there, but you shall see it.”

Soon they came to the water, shining brownish black with flecks of greenish gold.
“Hold on tight,” said Leap. “There is danger under the water. Watch your golden heart!”

“What strange water,” said the princess, bending forward. At that very moment her little golden heart slipped over her head and dropped into the pool.

“Oh my heart! It’s the golden heart that my mother gave me the day I was born! What shall I do?” she cried.

She was inconsolable. She stared into the water, searching for her lost heart.

“Come,” said Leap. “It’s dangerous for us to stay here. If you’re looking into the water for one thing, you will forget everything else.”

But the princess would not leave. She got down off Longleg Leap and went to the water’s edge. “Go, my friend,” she said. “Let me stay here. I know I shall find my heart.”

She turned to him, put her arms around his neck, and kissed his muzzle. Then, small and slim and undressed, she knelt down on a grassy hillock. Leap stood there for a long time, but at last he turned and disappeared into the forest.

Many years have passed. Still Princess Cottongrass sits and stares into the water, looking for her heart. She is no longer a little girl but a slender plant crowned with white cotton, leaning over the pool.

Every now and then Leap returns and watches her fondly. Only he knows that this is the princess from Dream Castle. He thinks perhaps that every now and then she nods and smiles at her old friend. But she cannot follow him anymore. She is under the spell of the pool where, far, far under the water, lies a lost heart.

(Based on the story told in An Illustrated Treasure of Swedish Folk and Fairy Tales, Floris Books, Edinburgh, 2019.)