Landlord Who Steals from the Devil

I was standing on the porch when I saw the man approaching. What a horror! It looked as if the scare-crow who had been hanging in the fields for ten years had just pulled himself off the stake and stumbled down the road.

I called to him. “Where do you you come from?”

“From hell!” he shouted.

“The Devil’s sooty brother, and my king as well!” he replied.

I would not let him enter, but when he showed me the gold in his sack, I changed my mind. He looked like a beast and stank like one, too, but I let him have the best room in the house. He ate, he drank, and after he went to bed, I went upstairs and waited by his door until I could hear him snoring. Then I went inside and stole his knapsack.

It’s not wrong to steal money from the Devil, is it? No, I don’t think so. I took away a little of his power, that’s all. Don’t you think?

Landlord Who Steals from the Devil in The Devil’s Sooty Brother, Grimm. Illustration by Arthur Rackham. 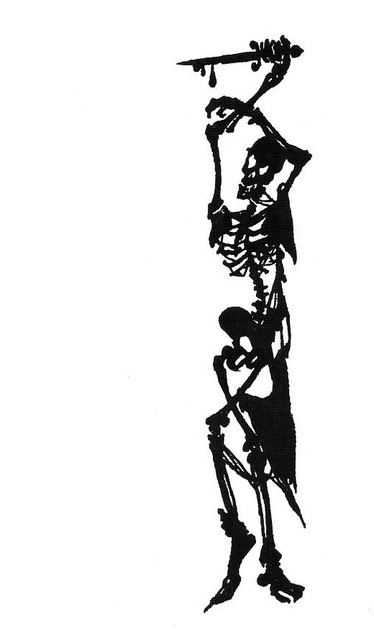