My three daughters were as beautiful as they were good, and much loved by people throughout the isles of the West. Then one day, as they sat on the rocks on the edge of the sea, dipping their feet in the water, there arose a great beast from under the waves and swept them away beneath the ocean.

The fishermen saw it, but none knew where they had gone or how to find them. The whole country wept, and we were still weeping at Christmastime. For that reason, I was much affronted when I looked out my window to see the local fellows planning shinny on my lawn!

I shouted at them, and called them into my hall. “Why did you choose to play shinny in front of my castle when you knew full well that you would be reminding me of my daughters? You will suffer the pain you have made me suffer!”

I was angry but my heart softened in the presence of the lads. They were good fellows who had just wanted some fun after a long spell of grief. Ian was one most gallant among them, and he stepped forward.

“Since we have done you wrong,” he said, “build us a ship, and we will go and seek your daughters. Let them be to windward, or to leeward, or under the four brown boundaries of the sea, we will find them before a year and a day goes by, and will carry them back to Grianaig.”

The ship was built in seven days. We loaded it with a great store of food and wine, and the lads sailed away. 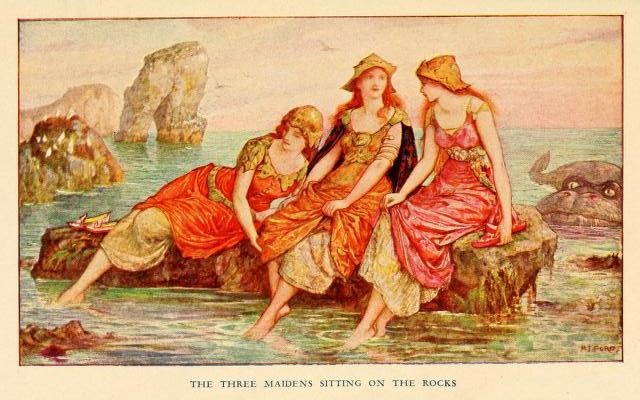