King Who Wants a Lantern

I hired a page named Pinkel to serve my son. I liked Pinkel. He was clever and amusing, and he saw everything that passed under his eye.

One day, I went to the stables to make my weekly check on the horses. We had recently hired two brothers, and they had groomed the horses so well their coats gleamed like satin.

In our conversation, one of the brothers mentioned a lantern he’d seen on an island in the middle of the lake. It was in the possession of a witch who lived there.

“I wonder how I might acquire that lantern,” I said. I could already see it in my collection of marvelous things.

“Send Pinkel for it,” said one of the boys. “The witch no doubt came by it in some evil way. Pinkel has a smooth tongue, and he can get the better of any woman, old or young.”

King Who Wants a Lantern in Pinkel the Thief, Orange Fairy Book. Illustration by H.J. Ford. 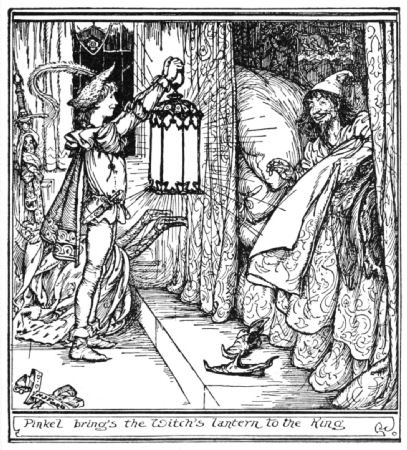