King Who Loses His Wife

Perhaps I tried too hard to please my neighbors. I was too kind. I created false expectations, rivalries and the jealousies. The long and the short is, I was always at war.

Shortly after I married, I lost a hard battle and we had to retreat behind the walls of my capital. I made preparations for a long siege and sent my wife to a secure castle. She didn’t want to go, but the old castle was well fortified and stood on the outskirts of a great forest two hundred miles away.

The siege went on for a long time. My wife and I continued to send messages back and forth, but when the siege became intense, I forbade all messengers to leave the castle.

After several months, the battle ended and then I received a message. My wife had gone hunting and had not returned.

Years passed and I did not hear a word. After nine years, I decided to marry again. Then, just before the wedding, when I was in the Hall of Audience, examining wedding clothes, a tiny procession came down the gallery and into the hall. First came a contingent of grasshoppers, followed by a tiny green field frogs mounted on snails, followed by water-rats dressed as pages, and lastly, a frog. She was seated on a tortoiseshell litter borne by eight toads.

With one bound, she jumped out of her litter and landed on the floor. With a second bound, she landed on the arm of my chair. She proceeded to inform me that I could not marry because the queen was alive and well in the underworld. She gave me a letter written on a handkerchief in my wife’s blood. I kissed the handkerchief three times and burst into tears. I’d go anywhere to find her. I’d go into the depths of hell.

King Who Loses HIs Wife in The Frog and the Lion Fairy, Orange Fairy Book. Painting “Orpheus and Eurydice” by Adelaine Sparkes. 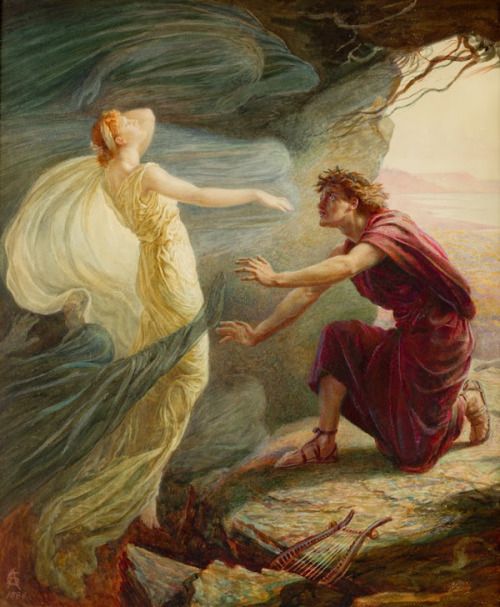