Holy Man in the Desert

I sit in the desert, in the shadow of a great rock. From time to time, a person who is lost will find me in the wilderness. Just the other day, a young man approached me. A fine-looking man, but completely bald. He said he wanted to marry the sultan’s daughter but could not do so unless he was able to collect all the birds in the world and bring them to the sultan’s garden.

I directed him to a cypress tree two day’s journey from here, the largest cypress on earth. I told him to sit under its shade where the shadow is darkest, and to keep very still. By and by, he would hear a mighty rustling of wings, and all the birds in the world would light on the tree’s branches. “Make not a sound until all the birds are quiet,” I said. “Then cry, MADSCHUN! The birds will be forced to remain where they are—not one will be able to move from its perch.”

I instructed him to pluck the birds from the tree and place them on his person—shoulders, arms, head, chest, and legs, and carry them to the sultan.

Holy Man in the Desert in Madschun, Olive Fairy Book, Illustration “You Shall Have Homes” by N.C. Wyeth. 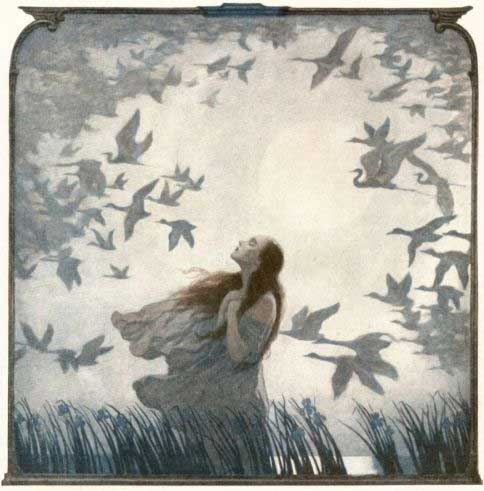