Hans and the Locked Door

One fine summer morning when I was sixteen, I left my old parents and set off to make my fortune. I had nothing but the clothes I wore on my back. After I had been walking for some time, I met an old, white-bearded man coming along the footpath. Neither I nor the old man stepped aside and so we ran against one another with a bump.

“It seems to me,” said the old fellow, “that a boy should give way to an old man.”

“The path is for me as well is for you,” I answered.

“Well that’s true enough,” said the old man. “And where are you going?”

“I am going into service.”

“Then you can come and serve me,” he said. He offered to pay me two pounds a year for cleaning some of his rooms, and that seemed like a pretty good offer. We set out together, crossed a deep valley, and came to a mountain. The old man opened a trapdoor in the earth and told me to follow him. We went down a long flight of steps and when we got to the bottom, we came into a large number of lamplit rooms.

Soon after, the old man said he was leaving and wouldn’t be back for a while. He told me to strew sand on the floors every day, and he forbid me to open one particular locked door.

He was gone for so long that I didn’t see the point of putting sand on the floors every day, or even of keeping my own room clean. All I could think of was that locked door. 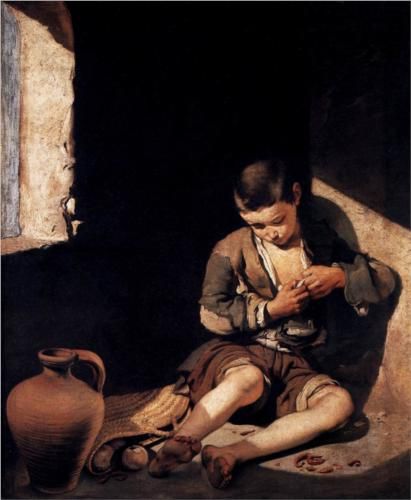