Where had my grandson gone? I had searched for him everywhere. While I was searching, I entered Mink’s cottage, because I wanted to buy some sea urchins’ eggs. When I went inside, I saw the wolf skin which I guessed at once was the skin of my grandson.

“I knew he was dead – I knew it! I knew it!” I cried, weeping bitterly. Then Mink told me rudely that if I wanted to make so much racket, I had better go do it outside. So, half-blinded by my tears, I went home and flung myself down before the fire. My old husband was there with his friends and he asked me why I was weeping. I told him that Mink had killed our grandson. The wolves promised to avenge him, but it took them a long time to decide how, as one wolf proposed this and another proposed that. They finally agreed that they would try to trap Mink by inviting him to a party. I won’t say I was enthused about the plan. The old wolves were likely to forget what they were doing once the party got started.

Grandmother Wolf in The Mink and the Wolf, Orange Fairy Book. Illustration by H.J. Ford. 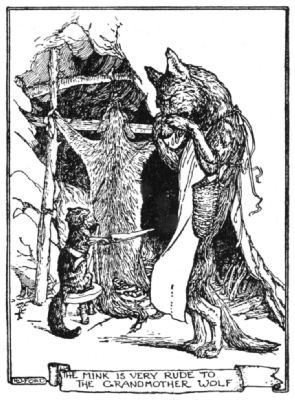