Governess of the Monkey Prince

Prince Alphege has disappeared, but I have the strongest feeling that he is still with us. The other day, a green monkey escaped from the palace and sprang through our window. He wouldn’t let anyone else near him but my daughter and me. When I looked into his green eyes, I was sure that the monkey was the prince. Had been put under a spell? Last night, I told my daughter Zayda what I suspected, and her eyes filled with tears. She knew it too. Nobody knows Prince Alphege better than we do.

Last night I had a dream that the queen directed me to a marble slab at the foot of the myrtle tree in our garden. Under it, she told me I would find a crystal vase filled with green liquid. “Bathe the monkey in a bath filled with roses and rub him well with the liquid,” she said.

The liquid was there. I am holding it now.

Governess of the Monkey Prince in Alphege, or The Green Monkey, Yellow Fairy Book. Illustration by H.J. Ford. 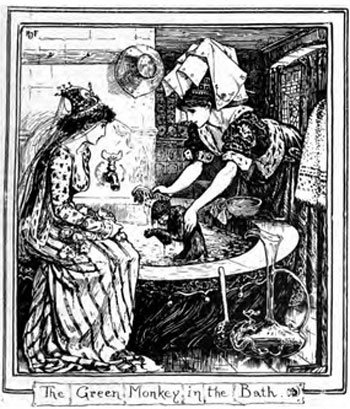