One day when I was hunting, I came upon a strange sight. A python had wrapped himself around an antelope, and the antelope had stabbed the python. He had pinned him to a tree. The python couldn’t move, and the antelope couldn’t get his horn out of the tree.

Each of the unfortunate creatures pleaded for his life. The python won because he promised me a great reward. I killed the antelope, and in his death throes, he said: “The python will reward you, but your reward will be your undoing!”

The python led me down a hole in the earth. It was just big enough for my body to fit through. He told me to hold onto his tail, and we traveled down, down, for days. At last, we came into a beautiful country. The serpent changed into a king, and the king said, “Ask for anything.”

I asked for his magic mirror–the mirror known as Sipao. I built a kingdom with that mirror, but the antelope was right. In the end, it undid me. It undid all my people. 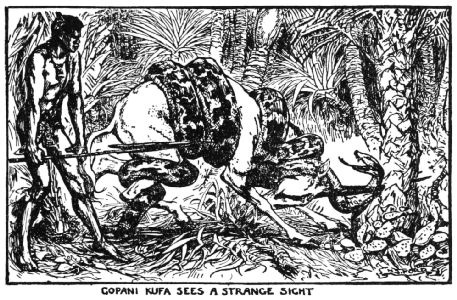