I watched him journey over the hills. I watched him ford the rivers and cross a wide plain. He couldn’t find the blue falcon. The sky grew dark, and all the birds sought their nests, but Ian Direach had none of his own. He lay down under some bushes until sleep came to him at last. In his dream, a soft nose touched him, and a warm body curled up beside him, and a low voice whispered to him:

“Fortune is against you, Ian Direach. I have little to offer you but the cheek and the hoof of a sheep. With those you must be content.”

Ian Direach woke and saw me lying there beside him.

We kindled a fire, ate some supper, and slept. In the morning, I told him where to find the blue falcon. I would lead him to the house of the Giant of the Five Heads and the Five Necks and the Five Humps. I told him to do the giant’s bidding, nimbly and cheerfully, and to treat all his birds kindly. Eventually, the giant might put the blue falcon in Ian’s care, and then Ian would have an opportunity to whisk the bird away.

I knew that Ian could win the giant’s trust. He was a charming lad. But he wasn’t terribly skillful, which meant that he would have many more adventures ahead. Happily for me, that meant a long friendship.

Gille Mairteau the Fox in How Ian Direach Got the Falcon, Orange Fairy Book. Picture by Beatrix Potter. 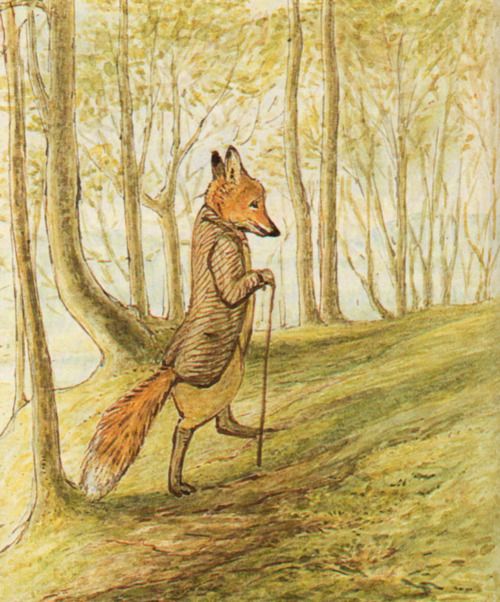