Fairy of the Forest

“Fairy of the Forest!” I hear him call my name. I appear at the doorway of the cottage, under my veil. “What is the matter?” I inquire softly.

I know the man. He helped my fairy godmother to draw water from the well. The old woman told him to call my name if ever he found himself in danger.

He is not exactly in danger. He wants to find an anklet like the one that he had picked up after it had fallen off the foot of a witch. He gave it to the king’s daughter, and now the spoiled girl wants to complete the pair. I know who put that silly idea in her head. A pair of idle birds were squawking about how she looked foolish with only one foot adorned and the other bare.

I can give him the precious gems that are needed to make the anklet, but there is only one way to do it. He must cut off my foot and hold it over a cauldron of water. Every drop of my blood will form a jewel.

Fairy of the Forest in Jackal or Tiger? Olive Fairy Book. Illustration by H.J. Ford. 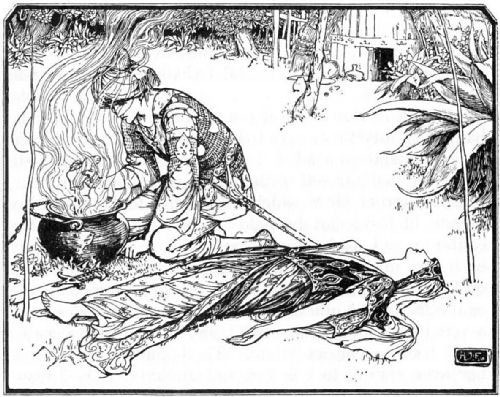