The gardener asked me why I was looking so sad, and I told him the reason. “My wife Dorani is as lovely as the stars, but she won’t speak to me. Every night she leaves me, and goes back to her father’s house.”

The old gardener gave me six small packets of powder and told me to sprinkle the contents on my body. I would become invisible, and then I could follow Dorani.

That night, I went with Dorani to her father’s house. I watched her remove her veils, and I followed her through the passages that led to the women’s quarters. She adorned herself and then she sat on a stool and commanded it to fly. I caught one of the legs and we shot through the air to the house of a Fairy who took us to the palace of Indra, King of Fairyland. Dorani sang for him, and her voice was so enchanting, I never wanted her to stop.

Yet everything came to a stop, eventually, when the truth came out. Dorani was not unhappy to end her visits to Indra. She said it was a break from the weight of the past.

Yes, but I wondered, would she ever sing like that again? 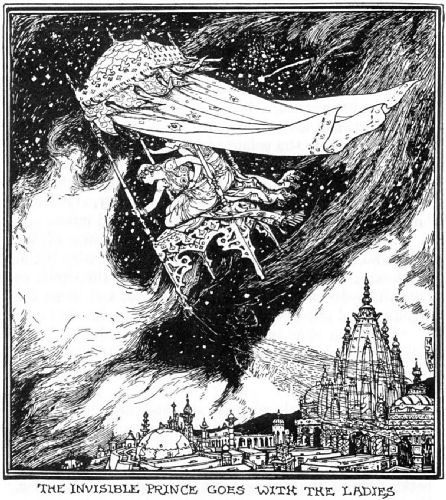