I was poor, but worse than poor, I couldn’t keep any money in my pockets. I had borrowed from a banker who was charging me interest, and my debt had tripled. Business was bad, I couldn’t sell my oil, and I couldn’t pay the banker. He kept coming round to my house every evening, and he was becoming so violent that I had begun to fear for my life. I wanted to escape but how? I couldn’t fly off with my wife and daughter in tow, so I decided to leave everything behind.

I slipped out of the city in the night, not knowing where I was going. After awhile I came to a well by the wayside where a giant peepul tree stood. I was tired so I decided to climb up in it and rest for the night. I curled myself in its comfortable branches and fell asleep. While I slept, some spirits who were roaming the place, picked up the tree and flew it off to a far away shore where no creature lived. Then they set it down.

I woke to find myself in the midst of a forest that stood by the seashore. As I collected my senses, I caught sight of twinkling lights, here and there, flashing like little fires in the night. They moved all around me, so I decided to grasp one. It was a sparkling red stone, scarcely smaller than a walnut. I collected a few and put them in my pocket, and then, just before daybreak, the tree picked itself up from its roots and flew me back to the well by the wayside!

Dena the Oil-Seller in Grasp All, Lose All, Olive Fairy Book. Painting by Charles Robertson. 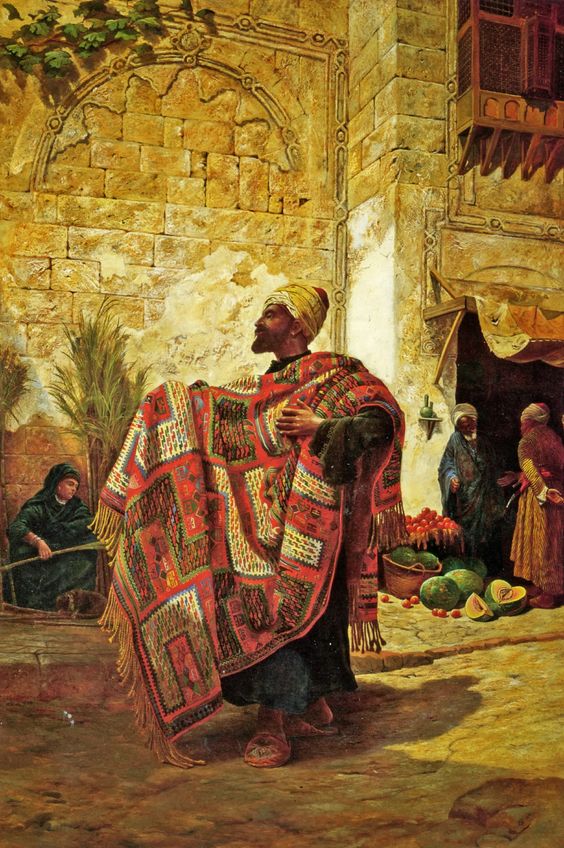