Childless Queen Who is Given an Egg

I hid my unhappiness from my husband, but when he was not with me, I often wept. I didn’t seem able to conceive.

One day, when the king had gone to war, I couldn’t bear being in the castle. The air was suffocating me. I went out, wandered in the garden, and came to a grassy bank under the shade of a lime tree.

I might have slept, I don’t know, but some time later a sound of a rustling startled me. An old woman approached the stream, limping on her crutches. She dipped her cup into the water and had a good, long drink. Then she looked at me and said, “Do not take it evil, noble lady, that I dared to speak to you, and do not be afraid of me, for it may be that I shall bring you good luck.”

I doubted that she could do much for me. She had not been very lucky herself, and I said so.

“Under rough bark lies smooth wood and sweet kernel,” she said. “Let me see your hand that I may read the future.”

She saw my sorrows right away. She knew the weight of my heart. She said that one sorrow was new and one was old. One was for my husband who was fighting a war, and the older one was for a child that would not come.

I drew my hand away, frightened and also embarrassed to be seen so deeply and so well.

“Have a little patience,” she said, “for there are some things I want to see more clearly.”

She told me that she could lessen my grief, but I would have to follow her instructions exactly. I was willing, for I had come to trust her. Then she drew something out from the folds of her dress, undid a number of wrappings, and brought out a tiny basket made of birch-bark. She held it out to me and said that it contained a bird’s egg.

Then she told me how to care for it.

Childless Queen Who is Given an Egg in The Child Who Came from an Egg, Violet Fairy Book. Picture by Odilon Redon. 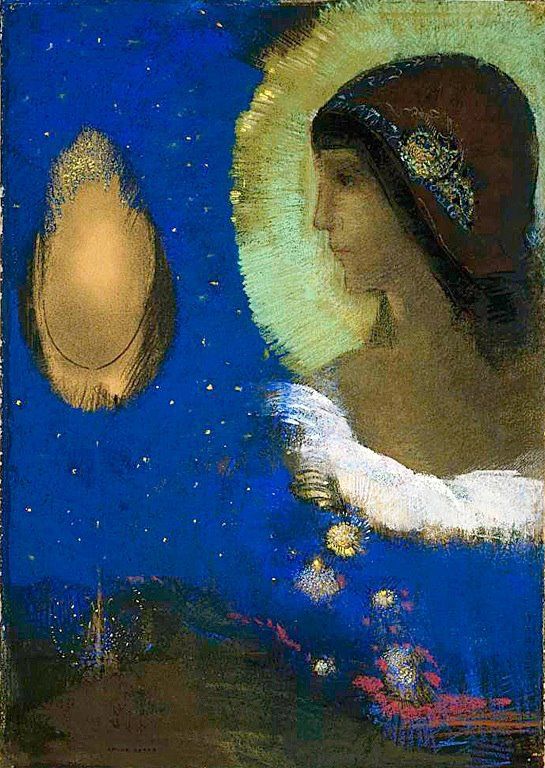