Boy Who Wants to Know His Father

When I was only two years old, my mother took me with her into the woods to gather branches for the fire. It was spring-time and I can still remember the delight I took in the flowers that carpeted the forest. Then all of sudden, two men sprang out of the thicket, and seized my mother and me. I don’t remember being carried into the black forest, or coming into the robber’s cave. I am familiar with it now, because I have grown up here. My mother works as a housekeeper, and the captain of the robbers is the only father I’ve ever known.

Now I am nine years old. My mother says I’m strong for my age. She has told me many stories about knights and their adventures, and I have made myself a club out of branch of fir. I’ve hidden it behind the bed. Last night, I went to my mother and I said, “Mother, tell me. Who is my father? I must and I will know.”

Mother became silent. She would not say anything. After she went to bed and the robbers came back, I took my club, and I went up to the captain. I said, “I want to know who my father is, and if you don’t tell me right now, I’ll strike you down.”

The captain laughed and he punched me so hard on the side of the head that I rolled under the table. When I got to my feet, I went to my room thinking, “I’ll wait another year and then I’ll try again.”

Boy Who Wants to Know His Father in Strong Hans, Grimms. Painting by Michelangelo from the Sistine Chapel. 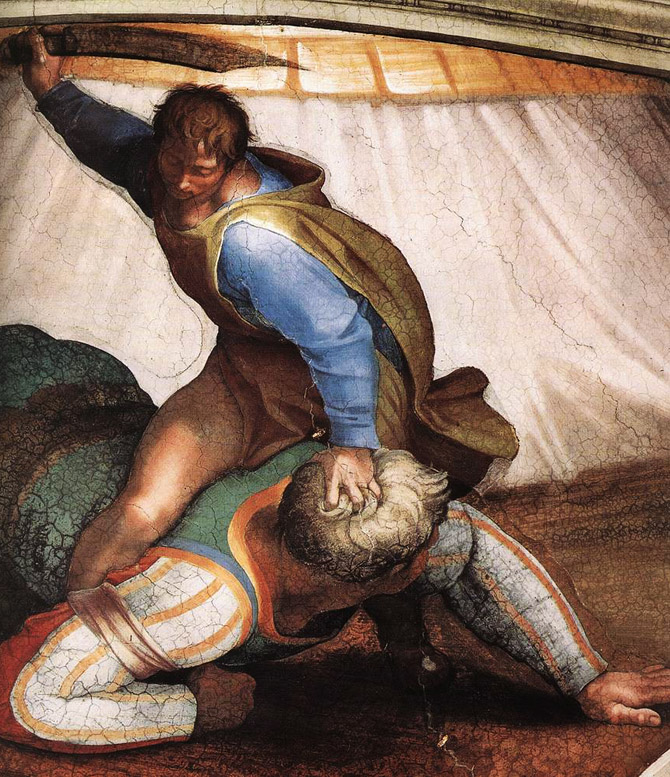