One day when I was playing in the streets, a stranger came up to me. He asked me if I was the son of Mustapha the tailor. “I am, sir,” I said, “but he died a long time ago.” The man put his arms around me and said he was my uncle. “Go tell your mother I’m coming,” he said. I ran to the house, and my mother was amazed to see him because she thought my father’s brother was dead.

When we were eating together, he asked me what I did for a living, I hung my head. I was idle. I had always been idle. I didn’t know what to do with my life.

My uncle said, “Why don’t you come and help me stock my store with merchandise? I’ll give you a job.” The next day, he bought me a fine suit of clothes. Then he took me all over the city and showed me the sights. After that, he took me out of the city gates, into the forest. We walked a long, long way, and came to a narrow valley between two mountains. He told me to light a fire and then he would show me something wonderful. When the fire was lit, he threw a powder on it and said some magic words.

The earth shook and revealed a square stone with a brass ring in the middle. I tried to run away, but the man caught me and gave me such a blow that he knocked me down. “Fear nothing. But OBEY me,” he said. He ordered me to go down into the earth.

He wasn’t my uncle! None of this would have happened if I hadn’t been idle. Why hadn’t I found my own trade? 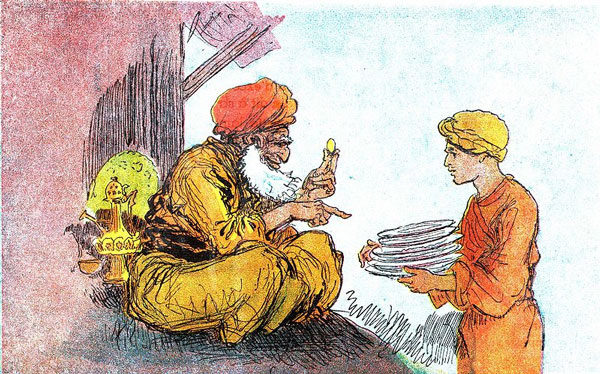