The Prince Who Releases the Fish

Taking the chance that I might be able to cure my father’s blindness, I gathered a crew and we set sail. The physician gave us a hundred days to catch the Golden-Headed Fish, and for a hundred days we caught nothing.

On the eleventh hour of the hundredth day, I cast the net myself, and to my astonishment, I drew up the long-awaited, glorious Fish. Success, at last, but, as often happens with success, it came too late. Time had run out, and the blood of the Fish was no longer any use to us.

I thought, I can at least take the Fish back to my father to show him that we did what we could. It won’t cure his blindness, but at least he won’t see me as a failure.

I looked into the eyes of the Fish in the tangled net, and saw that I could not condemn this marvelous creature to death for no good reason.

So I released him from the net, and gave him back to the sea.

The Prince Who Releases the Fish in The Golden-Headed Fish, Olive Fairy Book. Illustration by H.J. Ford. 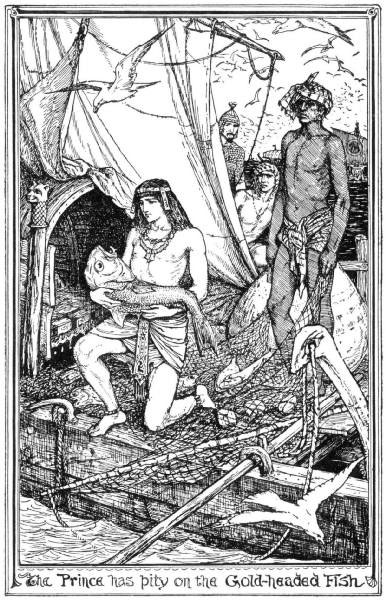